Another Day in Paradise! 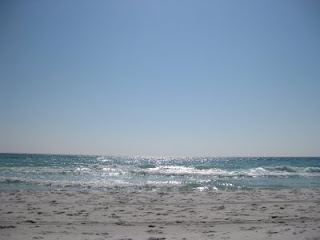 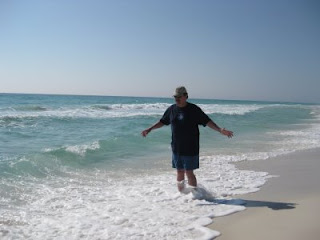 Hope you're all having a wonderful week and that the ice storm isn't too bad!

As you can see, Woody is in the water...after a bit of wading, you get used to it. We're seeing tons of beach erosion and I'm not sure it's going to get much better. Currently, Destin Harbor is at 6 feet in depth and a few of the larger sailboats can't get out. The city and state are arguing with the Corps of Engineers and who knows who about funds for dredging. The frightening thing is that on Okaloosa Island they are talking about levying the homeowners to rebuild the beaches! How would you like to spend millions on a beachfront home and then have to pay to rebuild the beach. If you don't think climate is an issue, watch how this evolves! Without the dunes and beach, a hurricane with a storm surge will wipe this region out. Our beach in front of the RV park has been hit hard, and the waves and wind were so bad last week it snapped the beach volleyball pole. It was a big pole!

Did any of you watch The Last Templar on NBC Sunday night and Monday night? I loved the book, but this was the worst miniseries or movie I've ever seen...if what I saw was acting, I'm moving to Hollywood cause even I can do better! You know it was bad when Woody suggested we flip to the Bachelor at commercials! Things have been a bit lazy down here...mostly eating out, shopping, eating out, walking, eating out, water aerobics, and oh, eating out! Donna, you'll love this...I taught one of my friends down here how to knit a scarf!! Of course, that's all I know how to knit! I did buy lots of yarn to work on a blanket for Riley, but it will be next year before she gets it at the rate I'm going. Did break down and buy a new Bramin purse, but it's a small one to replace my wallet on a string like purse from Montana! This one is a bit more upscale.

Sunday we cleaned! Woody washed and waxed the whole coach...he said no one would believe it so I guess I should have taken a picture! Our neighbors have all been cleaning so we were shamed into it! I cleaned the carpets and then read magazines and watched him work. There is something romantic about a man working. My goal today was to update a presentation on international clinical trials but I didn't get too far! I'm trying to read the Final Rule in the Federal Register...boring! I think the government needs new writers so that normal people don't go into a coma trying to decipher their findings! My goal is to write two intellectual articles a year! I did submit an essay to AARP on Beans, Egalitarianism and Obama and an op-ed piece to the NY Times. I'm still blogging to the Washington Post and occasionally other sites on healthcare. Wish I could figure out how to make some of these pay!!

We lunched with Robert and Laurie from MN at a Thai buffet in Ft. Walton on Monday after water aerobics and the food was great. I love Pad Thai...the spicier the food the better. We still haven't found a convenient Thai restaurant near Hendersonville so we'll just save that for our winter solstice. Camping on the Gulf is really slow this year. The usual bunch on the hill still made it, but we beach people have lots of space! I guess the economy has been an issue, although you'd never know it by the restaurants and stores around here. Much of this area has military families, lots of pilots, and senior support staff and, of course, snowbirds! We hear the planes and the helicopters a lot along the beach and occasionally they come right over park. There is a bombing range north of Destin on the other side of Choctawhachee Bay and we can hear them too!

Big plans for tonight...heading to our favorite restaurant, Dewey Destin's, a little dumpy place on the bay! http://www.destinseafood.com/ It's been here forever. Supposedly they are opening a more upscale version in HarborWalk, but we like the original too much to change! We go around 4P, early bird special and all; split an appetizer and entree...then have Dippin Dots for dessert! Thursday we're having a Low Country Boil here in the park...$15 for the two of us and someone else does the work! My kind of dinner. Told you we eat alot!

Off we go to eat again...don't look for us to be slim and trim when we come home!

Posted by Pat Stanfill Edens at 3:22 PM No comments: Links to this post 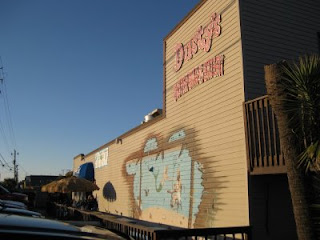 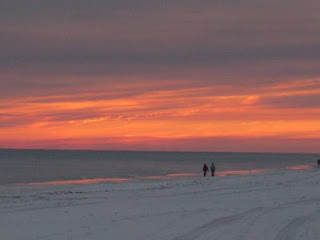 You all know how much I adore my very bright granddaughter! This is from her mommy:
I was taking Riley to school this morning and we were talking about Chris's birthday. She said, "Well Mommy, Daddy wants a fishing party and I think we should have a surprise fishing party." I said, "We aren't having a surprise party because we did that last year. I think we'll just take Daddy to dinner at his favorite restaurant." She said, "Oooohhhh sweet mama. We're going to Taco Bell." I thought you'd find that humorous.

Like all of you, we've had a bit of a cold snap...cold at night but we're still running around in jeans and sweatshirts during the day. In fact, it was cold enough last night that I actually cooked rather than going out! I needed comfort food...we've found the coolest recipe. Beef stroganoff hamburger helper; but instead of ground beef, add a can of roast beef, gravy and all. It makes it much richer in flavor.

I've been remiss at posting pictures. Here are a few for you! The restaurant is Dusty's Oyster Bar in Panama City Beach...fabulous food and we fed the fish! They were a hoot...the minute you walked out on the porch, they swarmed! We'll definitely head back there on one of our meandering trips. The beach shot was a few days ago. They are doing prescribed burns in some of the pine forests so it makes the sunsets interesting.
We're still eating tons! Today was IHOP...you know they are having the all you can eat pancake special! Of course, we're still frequenting the early bird specials...such fun being retired! Stay warm!
Posted by Pat Stanfill Edens at 5:43 PM No comments: Links to this post

We are so bummed. Our Titans lost! I think they finally believed their own press that no one thought they could do it. Kerry Collins did a fabulous job...now if our receivers and backs had some superglue on their hands. We also watched Cardinals Carolina last night...At this point, we're solidly behind the NY Giants...it they don't win, then it's Pittsburgh or Cardinals...NOT the Eagles or the Chargers!! We had planned on unplugging the RV and heading down the road to Tampa! Oh well...


The weather here in Destin, or officially Miramar Beach, has been fabulous until yesterday. We had rain in the afternoon and today it's cooler. Our high is low 60's, but we are expected highs in the 50's and lows in the 30's later this week. I can still live with that! Our friend in West Yellowstone said she went to work at -30 the other day with lots of snow. We're worried about the earthquake swarms in Yellowstone National Park. It would be horrid if there was an eruption of the volcano, but the volcanologists are saying it will probably be a hydro or geothermal event. In other words, a new geyser or geyser field. Problem is, the most activity is under Yellowstone Lake...it's too pretty to lose! I looked at what it took to be a Park Ranger online last night...I was supposed to be a forest ranger according to my high school testing...maybe it's not too late. Hmmmm.


Woody and I are still doing water aerobics. This is the longest we've stuck with any organized exercise regimen. We're walking more too...unfortunately all it is doing is stimulating our appetites. We ate at PF Chang's Friday night compliments of Libby and Led's gift card. We also love our Starbucks and McDonald's cards from Chris and Jen! Latest movie we saw was Marley and Me...cried my eyes out, but I may have told you that already!


I'm still a knitting fool, so watch out. I'm working on a lavender blanket for Riley so you'll be safe for a while...it's long! Hope you all have a wonderful week. Got to go pay attention to the Giants' game!
Posted by Pat Stanfill Edens at 1:50 PM No comments: Links to this post 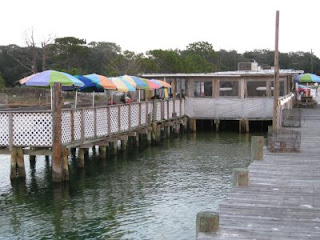 Hope you've all had a wonderful New Year's Eve and Day...now it's time to get about the business of 2009!
We ate at Landry's for New Year's Eve, but our favorite restaurant for fried shrimp is Dewey Destin! While it doesn't look like much, the food is out of this world. While you're waiting for your freshly prepared seafood, you can watch the dolphins playing and the pelicans and blue herons just hanging out! There are also several cats that hang out...they love shrimp!
http://www.destinseafood.com/
New Year's Day was fun at Camping on the Gulf. We had a great pot luck with lots of pork and black eyed peas! We're certainly going to have a prosperous, or maybe just gassy, New Year! For those of you who aren't southern...hog jowls and black eyes guarantee prosperity if eaten on New Year's day! Our resolution for the rest of our time here is to go to water aerobics three times a week...so far so good! We're at 100% compliance! but then it's only the 2nd of Jan! Wish us luck.
Weather remains fabulous and while we miss home and friends, we don't miss the weather!
Posted by Pat Stanfill Edens at 10:33 PM No comments: Links to this post