Things have been a bit hectic this summer! I have been working for The Oncology Group and traveling a good bit. I'm ready for retirement again! At least for a while.

So it's been weeks since we've chatted. Where to start? Probably the most exciting thing is Miss Libby is pregnant!! Keep Led and Lib in your prayers as they begin the exciting trip through parenthood! I was a bit worried though that she asked me what she would do with a baby after it gets here! Everyone just tells her to call Led's mom or me...hope I remember everything.

I finally entered this century and we bought a 52 inch LCD flat screen TV from Best Buy. Woody and I talked to everyone we knew about our purchase as we are both technologically challenged when it comes to electronics. Everyone said LCD over Plasma so that much we knew. We had been looking at TV's at Sam's because they seemed so cheap. Thank heavens we went to Best Buy...we didn't know about all those other things that you should consider over price. Something like HP, speed, digital compression....I don't know. Talking to our little sales guy was a real education and we're glad we didn't jump the gun...We have a Sony Bravia that is fabulous...watching football is a dream!

Saw Bette Midler on one of my work trips to Las Vegas...and yes, we did work! This was only one night. She is at Caesar's and well worth the time if you are a Bette fan like I am. She has lost a bit of her voice and a step or two but she is still hilarious!! After all at 63, she's in better shape than I am at 60!!! I didn't know what to expect since we usually go to the shows as opposed to the entertainers...she did stand-up comedy that was priceless! Including one fall down comedy bit where she forgot one of her jokes...we thought it was part of the show until Marsha talked to her sister! She had been off for a while. Now on to Cher!

Headed to Jackson last weekend to have lunch with my sister Dana (aka Miss Martha or now Miss Paula) and her hubby! Fantastic lunch...and then off to see my beautiful niece play soccer...she's the beauty pageant queen that's a tomboy! go figure. One of her mean coaches made her practice until she had holes in her knees...well, at least til the skin was scraped off. She got in to play for a bit even though she probably should have rested that torn skin! Miss O is in nursing school at Freed-Hardeman following in her cousin and aunt's footsteps! Wilkes is hanging out playing his music...he is an incredible musician! So the Jackson connection is doing well.
September is looking busy with a trip to East TN for Woody's family reunion, a couple of Titan's football games, and our 25th anniversary cruise to Canada!!! Just a few more months until Florida! I'm ready for beach.
Hope you all are having a wonderful summer...now back to Facebook which is occupying all my time!!
Posted by Pat Stanfill Edens at 7:46 AM No comments: 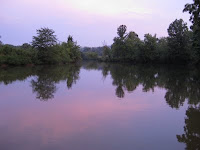 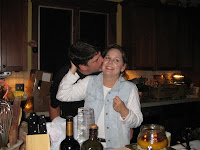 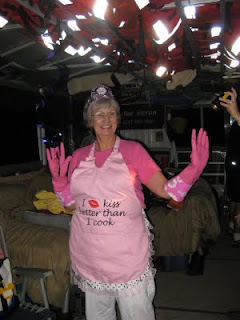 I don't even know where to begin! With facebook, I've just drifted away from my blog! I must return....there are so many people and so little time. Where to begin. Since my last entry, I went to Las Vegas for work and to Ohio for work. July and August are really dedicated to The Oncology Group and all our summer work! In between work, we've celebrated Donna's 60th birthday and Holly's whatever day on the Blue Heron, a lovely charter out of Ashland City. A wonderful time was had by all! Holly and Roy went all out on catering this lovely event...I can't believe how much they brought to the boat! But after all, Holly did used to cook on a charter boat! The food was beautiful and tasty...she should cater all the time.
A few friends from Mickey D's headed out to The Catfish House in Springfield for an early bird special...I ate until I was sick! The food was superb...in case you're seeing a trend here...I do love to eat. Throw in a few movies with popcorn and chocolate and life is good.
We did just book a cruise to Nova Scotia, New Brunswick, and Prince Edward Island for September! Can't wait. We also finally got into the 21st century with a 52" flat screen tv! Can't wait for Notre Dame and Mississippi State games. Can you tell I work for play and fun stuff? Most old retired people don't have the luxury of picking up this kind of supplemental income. Thank you Lord! and my mom for telling me I had to stay at Union in Jackson for college! I figured out a way to get out of Jackson by going to nursing school! Great choice....really wanted to be an archaeologist or astronaut or marine biologist, but girls didn't have those options in the "old days"!
Thanks so much for being patient with me...you can also check out our facebook at Pat Hudson Edens! See you there!
Posted by Pat Stanfill Edens at 10:07 PM No comments: