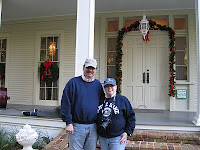 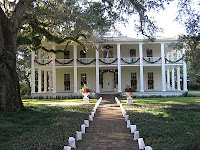 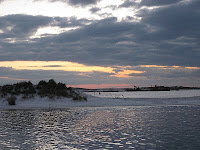 Merry Christmas from Destin! We've had a busy week or so. Spent a lovely afternoon at Eden Plantation and Gardens. Unfortunately no relation! As you can see, it is a beautiful antebellum mansion fit for Natchez in Port Washington, FL just up the road from Destin. The sunset is over East Pass in Destin. They are finally starting to dredge the Harbor so the boats can get out.
We are having fun in between wind and rain! The weather this December has been the worst that anyone can recall down here. It hasn't stopped us much. We've still been out and about. A few movies, lots of eating out, a little shopping, a little work for me, lots of reading for Woody. I've spent more time on facebook than updating my blog, but hey...the important people are my facebook friends! If you aren't on facebook, you should try it. It's great to keep in touch with family and people and old friends you haven't thought about in years and some you don't even remember!! besides...isn't if fun facebooking that you just got a shot in your butt? Yes..I'm officially sick and you know how I hate doctors. Woody finally hog tied me and made me go...he was right, although I hate to admit it. This is my first non-annual get my prescriptions refilled visit in years!
As I reflect on 2009, I must thank Marsha and Karen and The Oncology Group for my semi-return to the work force. I have been able to stay intellectually engaged and buy some toys. When you retire, you hoard your money because you don't know how long you'll live. The issue is: spend for fun now and then become a burden to your kids OR watch your pennies now and leave it all to the kids when you die sooner than expected. While I love my kids, they have to earn their own way now and not depend on mom and dad! Tee Hee!! I still love it that my retirement plan was based on taking my savings and dividing it by the number of years I expected to live. I didn't depend on Wall Street and in retrospect that was a good thing. We may not have millions plural, but we are having a million dollars worth of fun in retirement! Spending the winter in Destin, cruising to Canada, going to my first Nascar race at Bristol, gambling in Cherokee and Vegas, and finally going to the Jack Daniels brewery are just some of the highlights of 2009. I'm not bragging, just sharing my blessings! The Lord has blessed us with good health and sufficient wealth to do fun things!
So as we wrap up 2009 and get ready for the pot luck Christmas dinner in the trailer park tomorrow (yes I know it's an RV resort right on the beach next to million dollar mansions, but it sounds better to say trailer park!), Woody and I wish you Merry Christmas, love enough to share, sufficient wealth to meet your needs, and world peace! Life is good! Celebrate it through all the ups and downs and may you be more up than down in 2010!
Posted by Pat Stanfill Edens at 12:58 PM No comments:

A Cold, Dreary Day in Destin

OK, this is getting ridiculous. I'm sitting here in the coach watching the clouds roll in over the water...but at least the wind is from the south which warms us up! The waves are pretty ok but not like the first week when it was wild. We've now been here two weeks and other than the days I was in Las Vegas, it's been cool but sunny, overcast and cool or rainy! While I was in Las Vegas it was great supposedly. If I can just last through today, it is supposed to be beautiful next week. I come to Florida for the sun...I don't care if it is cool, but I MUST HAVE SUN or I get really crunchy. Poor Woody. At least the clouds make for beautiful sunsets. This was yesterday. Oh darn...it's raining again!!!
As always, we're eating too well and went to Callahan's Restaurant and Deli last night with Norm and Bill. The food is fabulous. Not sure where we'll go tonight. We've still not made it to our favorite, Dewey Destin's, but it's just been so cold. I guess we could to the new place that is actually a restaurant, but everyone says the old one on the bay with plastic over the windows and radiant heaters to keep you from totally freezing is still better. It is the one with the kitchen on wheels!
We can't even find a movie we want to go too...it's bad! But if you haven't seen The Blind Side with Sandra Bullock and Tim McGraw you have to go. It's the best movie I've seen in a long time...you just feel good when you leave. So I've updated my facebook and now the blog...then I think I'll just go read. Finished two books on the flight too and from Las Vegas...Deep Fathom by Rollins and Loitering with Intent by Stuart Woods...both were fabulous reads.
Hope your weekend is better than mine is starting out to be!
Posted by Pat Stanfill Edens at 3:15 PM No comments:

I have a Blackberry!

Despite Woody's misgivings, I got a Blackberry today! He really didn't want me to get one, but our IHOP was right next to a Verizon store! Big sign: Free Blackberry with 2 year activation! Now the fun part is I tried to re-sign my contract with Verizon back during the summer and they just were too busy to talk to me so we left. Otherwise I couldn't have gotten this one! So now I'm part of the crackberry generation again.

We've had a great week settling in and eating at our favorite spots. It's really been colder than usual down here in Destin and everyone is complaining. Hopefully in the next few days it will warm up to normal. Today it was in the mid 60's and sunny up until about 3:30P and then it began to cloud up. The sunset should be beautiful...if it is, I'll post pics!
Posted by Pat Stanfill Edens at 3:35 PM 1 comment: 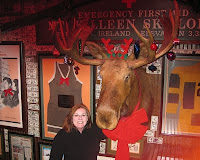 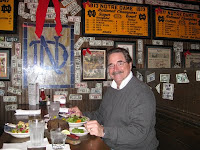 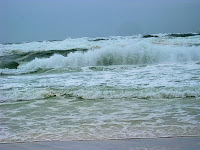 Well now we've been to Buster's and McGuire's Irish Pub! Two of our favorite restaurants. McGuire's has the best prime cut steak in Destin and almost as good as some we had in Montana last year! Not cheap, but incredible! It also has an entire room of Notre Dame memorabilia! and multiple moose...mooses? decorated for Christmas of course. We've had a horrid storm today with up to 60 mile an hour gusts, horizontal rain, and more rain! The beach sand has moved up to the slips on the beach so it will have to be bulldozed back to the beach!
We're staying in until later this afternoon when it's supposed to clear. Then out to more favorite restaurants! The economy down here seems to continue to be slow. Several more restaurants and stores have closed or are closing. Pat O'Briens opened last year and has already closed at HarborWalk. The RV resort where we stay every year, Camping on the Gulf, is very empty although it should pick up closer to Christmas and New Year's. It still won't be full according to the staff....not like 3 or 4 years ago when we were completely full. Not quite as much fun, but I have a better view of the ocean! The seas today were really rough. We'll see what we do next year when Savannah Elizabeth arrives...I may not be able to come down and leave her for 3 months! We may just do a cruise!
Posted by Pat Stanfill Edens at 12:05 PM No comments:

We made it to Florida Monday around 6P after driving in rain all day. Only to get more rain today...lots more rain...like flash flooding rain. Near Appalachicola they are expecting 70 mile an hour winds...wonder if an RV can fly? At least it's 60 so the rain is not freezing or turning in to snow! It's supposed to be out of here by tomorrow and back to what we expect of December in Florida. It's still great to see the ocean and the waves...since we're on the beach, we are a bit worried about the 4 ft storm surge...maybe we should move up the hill to a higher spot! Wonder if RV's can float? Oh well...it is what it is.
Posted by Pat Stanfill Edens at 11:10 PM No comments: