Our friends Jane and Bill kidnapped us from Mickey D's last week for an impromptu road trip. We went to their son's house to see 2 day old Yorkies! It's a good thing they look like rats right now, or I might have been tempted to buy one! I can't go back...in a few weeks they will be so cute! Andy and Harley would be jealous if I brought another baby home! I did say it was a road trip...their son lives in White House. We also went to Thomas Drugs for lunch...it's in Cross Plains I think...or maybe Greenbrier. I got so lost! no...it was Cross Plains! http://www.tnvacation.com/cities-towns/cross_plains We also went to a great antique store where Holly's elephant lives! Holly lives in Ashland City, but someone stole her elephant! We found it somewhere in the boonies!

We also went to Home Sweet Home in White House. http://www.homesweethomewh.com/index.html It's owned by Cinda Petty, Jane and Bill's daughter-in-law! Cool stuff. I bought a candle that I love...guava mango! Just a tropical gal at heart. If you're in White House you should go!
I'm continuing to work on photography, haiku into haiga, and trying to be creative! I'm still editing tons of articles. I did have a new article of mine published in the Healthcare Executive, the journal for the American College of Healthcare Executives. It was only a page, but it's a big deal to get in that journal! www.ache.org I still have two other articles that I need to polish and then send off...just busy busy busy. I don't know why I don't have more time! I'm retired for goodness sakes!
Went to the Titan's game today. The offense should buy the defense dinner! At least we won!
Just four more weeks til we're off to Florida! Can't wait...it's getting cold here!
Posted by Pat Stanfill Edens at 7:42 PM No comments:

"Closed for the Season" is the blue boat house at Percy Priest Lake where you usually can rent boats! 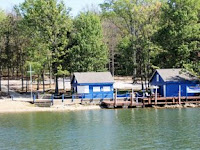 We're heading to East Tennessee soon to visit Woody's uncles! They are all 80+ years old and rocking! I hope that means Woody has good genes...I know he has good jeans! His back is yucky though...he keeps throwing it out! Or maybe it's just when I told him we were going to do yard work. We're trying to get the house ready in anticipation of putting it on the market again. We've found a condo in Gallatin that looks interesting. We went to the Del Webb community in Mt. Juliet, but they seem to have a high opinion of their property! It would be great if the pricing wasn't ridiculous! For what they want in just maintenance fees, I can hire a full time gardener! My roses, however, are doing smashing! It's amazing what a little water and Bayer rose food can do!
We're planning an exciting night out with Lou and Cindy Saturday....heading to the Italian Grill here in Hendersonville. Their food is great, and....they have a band! We don't know who's playing or if we'll go, but we may check it out.
I taking a few days off from editing...my brain cells are frazzled. The latest was a case report on a complex chromosomal abnormality! Yee gads! I had to look up every other word. I'm learning tons though...who says you can't teach an old dog new tricks? I need time to write creatively and take photos and do fun things!
Hope you all have a great weekend....
Posted by Pat Stanfill Edens at 1:47 PM No comments:

This week has made me remember why I was glad to retire! I've worked all week! Four manuscripts, a trip to Emory, and cleaning house! I think I'll take this next week off...or at least some of it! We have to mail a bunch of things we sold on eBay...didn't make much, but it probably paid for tonight's pizza! Libby and Led went to Tunica...hope she didn't lose all her money! Haven't heard...which probably means she's lost! Usually when she wins we get 47 phone calls! Hope you have a great week!
Posted by Pat Stanfill Edens at 6:04 PM No comments:

Off to work I go! 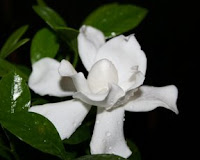 Just had another Haiku published online!

This one is on a Japanese web site! http://home.alc.co.jp/db/owa/ph_top?ctg_in=1 By the way, I'm Tranquility Found!


Off to see Mary at Emory in Atlanta today! I'm doing a presentation for the nursing leadership on Transformational Leadership. It's based on my chapter in her book, Nursing Management Principles and Practice, which by the way...you can order at http://www.ons.org/ ! And, the most exciting thing! I have a brief article coming out in the November/December issue of Healthcare Executive, the journal of the American College of Healthcare Executives, on Transformational Leadership http://www.ache.org/ ! It's interesting that 25 years ago, I implemented a shared governance model at St. Jude Children's Research Hospital and today, it's just as vital! Involving people, in this case staff, in the decision making process sounds so simple. If we can just convince managers that they don't have all the answers!

We're trying to decide if we want to sell the house (or at least try to sell the house) and move back into a condo! With Janet heading back south, we just hate to leave the house vacant six or seven months out of the year...we're traveling a bunch! We leave for Florida the first of December...we're snowbirds! That sounds so old!! Decisions..decisions..decisions. Feel free to weigh in on what you think we should do! We're so confused!

My poor Cubbies were swept! I had so hoped that Led could see the Cubs in the World Series in his lifetime! He's young...maybe there's hope! I love to aggravate him, but for those of you who know me...I'm not a big fan of baseball, but I love going to Cubs games! It's an event!

This week has been busy with tons of medical editing from Japan and Taiwan, but did take time out to put lots of Ellen Tracy stuff on eBay! We just love selling on eBay. We get to shop, antique, and junk, buy, and then sell...no clutter at home but still have the fun of the chase! Plus...it's always at least a meal or three out in profit! I feel like my dad, Bill Hudson! He always had a scheme to make a buck! Between editing and eBay, I'll never go hungry again! As if.....

Hope all of you have a great week!

Posted by Pat Stanfill Edens at 7:15 AM No comments: