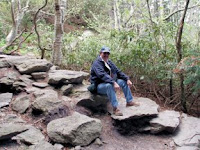 Tomorrow is Woodrow's 63rd birthday! A bunch of his friends are meeting us for dinner at Shane's in Hendersonville and then back home for cake and ice cream! No present from me...he got a new motor for his truck!
We drove all the way to Chattanooga to pick up our RV...no luck. All the things that were broken, that they said were fixed, are all still broken! Maybe it's Gremlins! Woody just told them to deliver the coach when they got it fixed and we left. We're supposed to head to Florida in the next few weeks! It had better show up soon! I need beach!
Yeah!!!! I may have sold a web site! Just got an email from someone who's interested. A few months back, I sat and thought up web sites to speculate. The one that's of interest is www.racerlady.com which would be great for Nascar, IRL and...well, you get the picture. I also own a few sites with health and business names. Who knows what I'll get into in to next! Between medical editing, working for Cathy on a project, selling stuff on eBay, and selling photgraphs on Yessy and BigStockPhoto, and now this...I'm going to have to go back to work to rest up!
We're heading to Libby's for Thanksgiving...I'm doing the dressing. Molly also is doing my dressing recipe for oyster dressing! Yuck...but she and her dad can eat a ton of it! I also have to make sweet potato pies! Such a gourmet cook. I'm ready for some good turkey.
Watched the debates last night! Hillary did well. I keep thinking about the joke about the three wise men...if they had been three wise women, they would have cleaned the stable, made a casserole, brought realistic presents...well you get the picture. We've had the good old boys in power...no more! I just read today that close to 20% of children in the U.S. are at risk for hunger. That's horrid. No healthcare for almost 50 million people. A war that doesn't make sense, and is costing us trillions of dollars and we can't feed and care for our children. The one concern I have is that we look like idiots on the debate...we're so busy fighting amongst ourselves, that people are going to get fed up. Here's the deal....elect Hillary president and get on with fixing the mess our country's in right now! Otherwise it's Rudy; his kids don't even like him! Mitt Romney...I don't think so! and while I'm from Tennessee, Fred Thompson can't decide what he wants to be when he grows up...actor, senator, ? president? Hillary wants the job and will do it incredibly well! Get over the fact that she stayed with Bill...he's a charmer. We all love him! The country was so much better off with the Clinton's in the White House. Go look at her web page...just keep an open mind! www.hillaryclinton.com
Life in retirement is good!
Posted by Pat Stanfill Edens at 8:40 PM No comments: 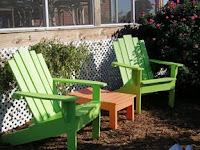 Woody's been on a project binge lately! Not too long ago we went to dinner at Donna and Mike's house. Donna is Miss Designer! Woody fell in love with her Adirondack chairs that were lime green...guess what we did this week? These are the chairs that our neighbor on Hidden Lake built for us! They had weathered to a dull gray, and I had considered painting them red or blue like everyone else! Once Woody saw Donna's....well, you know what we did! This view doesn't show the roses, but the chairs are in my little rose garden with yellow, pink, lavender and red roses! He did a beautiful job! Thanks Donna for the inspiration, and thanks to Valspar and Lowes for the paint colors. Just so you'll know, Donna's was custom color...we had to make do with generic paint off a paint chip!! www.lowes.com
We're also trying to get the yard ready for winter. This has been gardening week! We replaced a few shrubs, weeded...I don't think I like our neighbor with bermuda grass! It's everywhere, but with global warming maybe it's the best grass as it's heat tolerant! It also thrives on Round-up!
We thought about moving to a condo...even put down a little deposit. Now, I think we're back to staying here. I just don't want to give up all this room. With Janet moving out, it will be tough but we'll see what happens. Our Montana trip will be difficult next summer, but as long as Elroy is willing to mow, we'll be cool! Worst case, we get a lawn service. Like Woody says....I have no clue what I want to do. I love the RV most, but it's good to have a home base!
Went to a comedy dinner last night! We had dinner with our friends, and Chuck and Bill went on a comedy and joke binge! I've never laughed so hard in my life. If you need therapy, go to dinner with Chuck and Bill! Laughter certainly is the best medicine. We went to Blue Sky in Goodlettsville. It was great. We're also going out to Green Hills tonight to the Cheese Cake Factory...we're nothing if not versatile in our dining choices. I'm trying to talk Woody into going early so we can do a bit of Christmas shopping!
Go Titans and Go Colts! Sunday is football day! www.titansonline.com
Posted by Pat Stanfill Edens at 8:37 AM No comments: